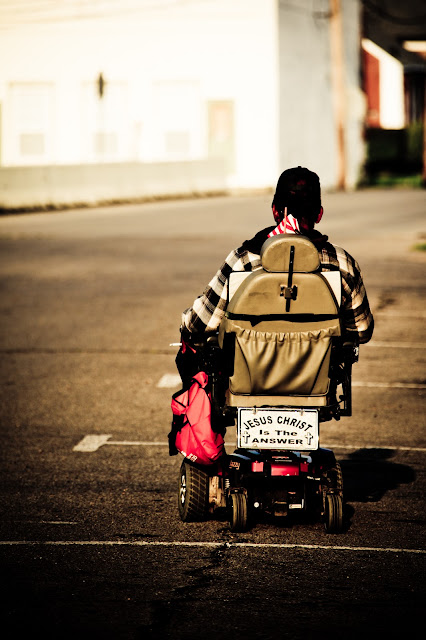 I first saw this gentleman in Rolling Fork, Mississippi about a year ago. My son and I left Vicksburg around 3:30 in the afternoon and headed up 61 North to the Mississippi Delta looking for some great Delta photos. As we drifted into Rolling Fork, Mississippi and headed downtown, I turned the corner and there he was. My heart jumped out of my chest as a photographer, the sun was setting and giving perfect light, he was rolling right down the middle of the road so the composition was perfect, the Jesus tag on the back of his chair could inspire someone that saw my photo, and the icing on the cake was this old glory flag waiving in the breeze as he moved. It was the PERFECT picture! Only one problem, my camera had the wrong lens on and he turned the corner as I frantically tried to switch it out. My heart sank.... I was sick to my stomach... A missed opportunity that I will never get back... or so I thought....

About a year later, I was out with my friend Marty and we ended up in Rolling Fork again. I wasn't even thinking I would see this gentleman again. But there he was.

This time I was disappointed. The sun wasn't setting, he wasn't in the middle of the street, the flag was all crinkled up. I even had the right lens on this time, but wasn't excited about the shot. All I could remember, is that the last time I saw him I could have had the perfect photo, and that this time it just wasn't the same. But instead of driving away, I pulled over and introduced myself to Mr. J.C. I shared my story about me seeing him a year ago, and we talked and talked. You see, what I thought was a missed opportunity a year ago, was quickly revealed to me that this was the real opportunity. Had I got the shot a year ago, he would have sped away and we would have never spoken and all I would have ended up with was a photo. By seeing J.C. a year later, I talked to him, heard his story and we shared our love for Jesus and what he has done for us. What I thought was a missed opportunity was God fostering an encounter with a fellow believer that I would have missed otherwise. Next time you think that God isn't listening, remember that it is in His time that his path for us is revealed, not ours.