It was an afternoon I'll never forget. A day that I could have thrown away and laid on the couch but for some reason decided to go and try to find God's beauty through the lens of my camera. The following is a blog that captured my afternoon over the span of about 6 hours.

It was a day that had beautiful blue skies, but every weather report said the rain was coming. So when Marty called me to go shoot some pictures, I was skeptical. But I met him and Jerry at the end of the driveway and 15 minutes later and we took off on our journey. What happened over the next few hours can only be shown in the pictures that we got that day.

First stop, Earl's Art Shop! What can I say about Mr. Earl? I have passed by his house at least 50 times in my life, and I always had something judgmental to say about "whoever" lived in that 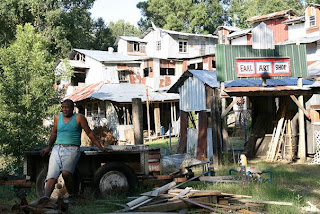 house. "He was crazy, he must be an old man, he was off his rocker". But then I met Earl. He is an artist. His house is art. His life is art. He has a studio deep in the heart of this monstrosity of a home that he pours out his heart into his artwork. Then I found out that his artwork has been sold to some pretty high profile blues clubs. My friend Marty has 5 or 6 of his pieces and now I'm proud to say that I own one as 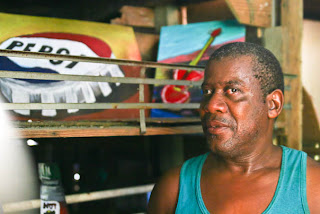 well. Earl loves to paint Pepsi logos and Tabasco logos, but for some reason there was a painting he did of an old guitar (see it there over his shoulder). Well that one instantly caught my eye and I had to have it. It was absolutely the best $30 dollars I ever spent. I still owe him $10 dollars, because all I had on me that day was a $20 dollar bill. But that's ok, now I have to go back!

Hey, just meeting Earl would have been enough of a photo shoot to call it a day, but that was just the beginning of our journey. We then stopped off at the 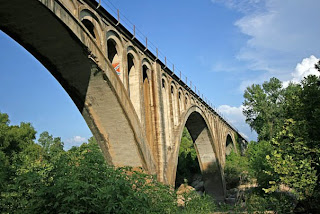 trestle bridge at Bovina. I had never seen this bridge before, the only time I had ever been there was once at night back in high school, but as an adult now to have something so beautiful so close to home and to have never seen it, I felt almost ashamed. The view from underneath this railroad structure was fantastic. The symmetrical arches that got larger as you got closer to the main footing was an architecture that you don't see on modern structures. Today, engineers dont waste time on the "art" of the structure, but only on the functionality. And today, the bridge, combined with the cloudy sky and the trickling of water that was flowing underneath made it yet another perfect photo stop on this journey. But as you can see in this picture, the rain clouds started pushing the blue sky out of the way, and within an hour we found ourselves in the throws of a rain storm. 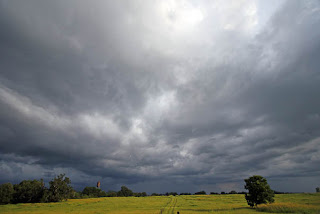 Yes the storms were here as promised, but that didn't deter us. We headed down Hwy 80 towards Edwards and right before it started actually raining, the deep black storm clouds were right on top of us, making the perfect backdrop for the photos we captured next. This field that we saw out the right side passenger's window as we headed east was a perfect photo stop, the background tower provided plenty of photos as well, but it would be later in the day on the way home that God would give us a better photo 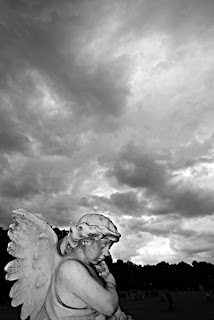 of the tower, so more on that later.

These clouds were something that normally if I saw them, I would run into my house and baton down the hatches until the sun came back out later. But not today. Today, I was right in the middle of the madness. The clouds in this deep black state were almost apocalyptic. The sun was still barely shining through the horizon, as you can see by the shadows and the rich green landscape, but overhead was the complete opposite. It was this overhead canvas that I used as the backdrop for the next set of photos.

The Edward's cemetery provided the foreground image for the next shot. This beautiful statue was the guardian angel for the soul she sat on top of. The clouds was no threat for her as she sat there undaunted by the approaching storm. She had weathered many storms before, her tombstone read from the early 1900's.

So let me remind you of how this afternoon started. I was "skeptical" of going out and taking pictures today, and then I grab this shot. I am thinking oh my God, if I had missed this shot I would have been sick to my stomach. This is so beautiful, and to capture it in a photo allows me to relive that moment over and over again. 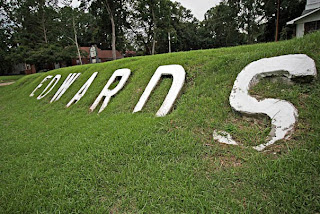 Then it poured down rain. While it rained we drove through Edwards, Mississippi looking and the downtown locations and shooting the breeze with casual conversation. Did you know that Edwards provided many a backdrop for the movie "Oh Brother Where Art Thou", so once again I am learning as we go, and I plan on watching the movie again to match up the places I saw in person today.

Stay with me now, I'm telling you that this story is far from over. We thought that because the sun was setting and it was getting somewhat dark, we better head home. The rain had stopped by this time and we went back down Hwy 80. Well God had other plans, we thought we were heading home, when in fact, the pictures had only begun. 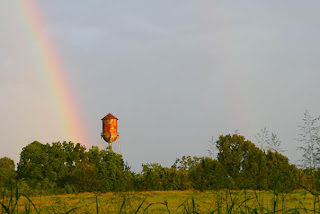 Remember that tower I mentioned earlier. Well on the way home, we looked out the driver's side window as we headed back west, and Marty said "I bet we see a rainbow in that field with the tower." and low and behold, there it was! It was actually two rainbows, as you can barely see the second one on the right side. Again, it appeared to be getting dark, but the rain stopped, the clouds started opening up and the sun was still there! It was simply hiding behind the clouds. We shot that rainbow until we could shoot it no more and this time the sun really was going away, so we took off once again.

But we are still not through! The sunset mixed with the storm conditions provided 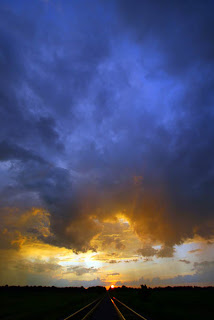 the perfect icing on the cake. What earlier in the day was an apocalyptic pallet of deep blacks and grays, was now something out of a Mars landscape.

Check out these pictures, I was standing right in the middle of this glorious beauty. It was the "perfect storm" of beauty. The rain made the railroad tracks shine like glass, the sunset lowering over the horizon with the rain clouds made this perfect color palette of pinks and blues. It was like a fireball on the horizon. These are real photos! I still can't believe it when I look at them. We were surrounded by this, it wasn't in just one direction, it was all around us.

Another aspect of this whole day was the friendship. Marty has taken something that he loves and offered to share this gift with anyone that wants to experience it. He knows every "secret" place in central Mississippi for a to experience God's beauty. He knows every waterfall buried deep in the woods, he knows what tree to g 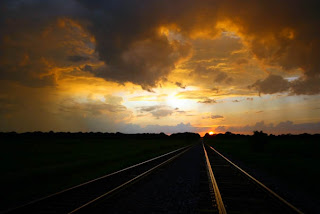 o shoot in the fall time because the leaves will be falling and the colors will be unbelievably beautiful. He tells Jerry and I all the time as we zoom in on a flower, that "God made every detail of that flower." My friend Marty and his family is going through some difficult times right now and as I write this and remember that God made every detail of the flower, I think of a bible verse for Marty.

Matthew 6:25-34 - "Therefore I tell you, do not worry about your life, what you will eat or drink; or about your body, what you will wear. Is not life more important than food, and the body more important than clothes? Look at the birds of the air; they do not sow or reap or store away in barns, and yet your heavenly Father feeds them. Are you not much more valuable than they? Who of you by worrying can add a single hour to his life? And why do you worry about clothes? See how the lilies of the field grow. They do not labor or spin. Yet I tell you that not even Solomon in all his splendor was dressed like one of these. If that is how God clothes the grass of the field, which is here today and tomorrow is thrown into the fire, will he not much more clothe you, O you of little faith? So do not worry, saying, 'W 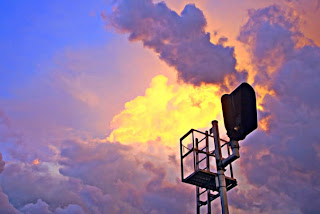 Looking back it is almost laughable, God set this day up for us, I am 1000% sure of that. There is no way this day could have been this perfect otherwise. We took a day that most people would have just laid around the house and waited out the storm, and made it one of the most incredible experiences of my life. This truly was one glorious day!
Posted by Robert Walker at 2:04 PM 2 comments: